The cost of remittances

Remittances flows are very important for developing countries. In 2009 the G8 pledged to reduce the cost of remittances to 5%, a commitment that was endorsed by the G20 in 2011 and 2014, and included in the UN’s Sustainable Development Goals in 2015. What is the cost today, and what are economists’ suggestions to reduce it?

Stephen Cecchetti and Kim Schoenholtz document the stubbornly high cost of remittances, and look at avenues for cost reduction. Today, remittance flows are triple what they were in 2000 and five times what they were in 1990. Furthermore, the economic importance of inward remittances has increased for low- and middle-income countries, rising from an average of 1.2% of GDP in 1990 to 1.6% of GDP today. However, costs have trended lower only gradually, and with considerable differences across types of transfer agents and across sender countries (see figure below).

While the direct cost is borne by the migrant senders and their family recipients, the burden also falls on poor countries as a whole because remittances enhance growth in poor countries by providing alternative means for financing investment where transactions costs are high. Cecchetti and Schoenholtz believe that there are two major mechanisms for reducing costs: consumer education (about the cost of alternatives available) and competition. Expanding mobile technology is also helping to displace banks, and squeeze remittance costs. 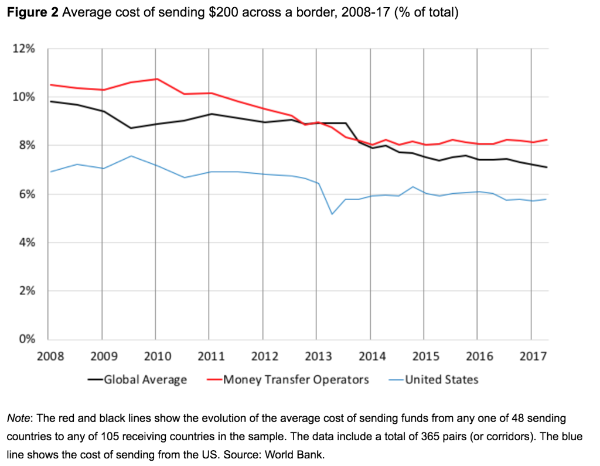 Across all corridors and all providers, remittance costs averaged 10.2% – and the average cost among banks was higher than the average for money-transfer operators. Relating remittance fees on the corridor level to an array of corridor-specific variables, sending country characteristics, and receiving country characteristics, they found that the number of migrants was statistically and economically significantly associated with lower average fees across corridors.

This seemed to suggest an important volume effect through scale economies and/or higher competition in a larger market. Corridors with higher income per capita in both the sending and receiving country exhibited – on average – higher costs, which could reflect higher costs of non-tradable goods, such as services, in general. There was strong evidence that competition does matter, as corridors with a larger number of providers exhibited lower fees and bank competition in the receiving country seemed to be negatively associated with the cost of sending remittances. Finally, they did not find evidence that remittance-senders’ literacy matters.

A 2014 paper by Bettin, Presbitero and Spatafora highlights the importance of financial development. They use a new dataset from the Bank of Italy, which provides bilateral information on remittance flows disaggregated across 103 Italian source provinces and 107 recipient countries.

One key result is that remittances are countercyclical with respect to income and output in recipient countries – in particular, increasing in response to exogenous shocks to which developing countries are particularly vulnerable – and procyclical with respect to the macroeconomic situation in the source Italian province. On balance, if the source and the recipient economy are exposed to negative shocks of the same magnitude (for instance, as a result of the global crisis), the anti-cyclical effect stemming from the output contraction in the recipient country prevails.

A second results show a negative correlation between remittances and financial development in the recipient country and a positive correlation with the degree of development of the banking system in the source economy. Lower transaction costs and better access to financial services by immigrants should therefore represent a key element of any policy to encourage remittances. 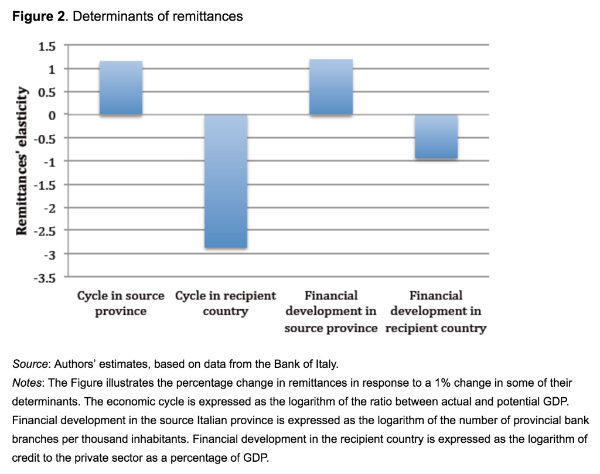 Doug King at the Federal Reserve Board of Atlanta looks at cost and accessibility of remittances originating from the United States with a focus on the Mexico corridor. The underlying question for the paper is whether the passage in 2010 of the Dodd-Frank Act did alter the landscape of remittances, through section 1073, which created new protections for US consumers sending money abroad.

Martin Namaska focuses on Africa, the most expensive continent to send remittances to. He cites research suggesting that digitising the remittance value chain from the sender to the receiver and removing dependency on agents will help reduce the transaction costs of sending money to Africa. Mobile phone technology, mobile money, digital currencies and cryptocurrencies, distributed ledger technology, electronic identification, verification and cloud technology have the capacity to technically make cross-border payments negligible in cost, instant and auditable.

Taking the UK and Africa as an example, Namaska argues that £100 million could be saved each year in transaction costs if people switched to sending money digitally to Africa. If the cost of sending money to Africa was to meet the UN Sustainable Development Goals (SDGs) target of 3% by 2030, then over £300 million a year would be saved. The development of regional automated clearing houses in Africa also presents a channel for improving the efficiency and reducing the cost of low-value cross-border transfers into Africa. But improved trust and comfort with digital money will be required before new technology can reach its full potential and reduce costs.

This is why no single technology can be applied to fix the remittance challenge in Africa: it would be difficult to imagine progress without corresponding financial sector reform, corporate governance and anticorruption efforts. African governments, development agencies and service providers must collaborate to create complete systems that reduce both the risks and costs associated with money transfers. How can artificial intelligence have a positive impact on the economy? How does AI impact competition policy? How can the EU and Japan become leaders in AI? Questions to the Competition Commissioner-designate

Commissioner Vestager has been given two portfolios; Executive Vice-President for a Europe fit for the Digital Age and Competition Commissioner. While having more than one portfolio may not be new, combining an important policy coordination function and an enforcement function is a novel approach. This raises a number of important questions related to how the objectives of either portfolio can be delivered cleanly. This is a closed-door workshop jointly organised by MERICS and Bruegel looking at China-EU investment relations.